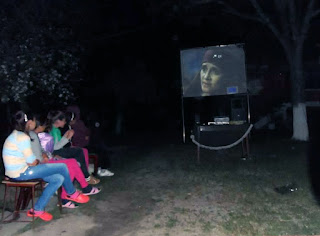 When Claudia set up a showing of Magdalena: Released From Shame for women in a Romanian village outside of Bucharest, she didn’t know if anyone would bother attending. To her surprise the women came. In their flowing, colorful skirts and headscarves, with young children on their hips, curious Gypsies filed in.

Most of the 30 women couldn’t read or write. Many probably struggled with alcoholism and had sons or husbands in jail. But the chance to see and hear Jesus speak to them in their own language drew them in.

Serving as the Magdalena coordinator for all of Eastern Europe, Claudia has a heart for the women in her corner of the world. Born and raised in Romania, she works tirelessly to communicate the gospel message of hope to the women in her motherland, showing them Jesus truly cares for his Romanian daughters.
This first showing three years ago started a fire among the Gypsies that continues today. Those women continued to meet for discussion and fellowship. Claudia also met with them, sharing ways to grow in Christ and discussing the lessons she learned from Magdalena.

“The Christian Gypsies are very active in sharing the gospel,” said Claudia. “The biggest issue is they don’t have access to the written Word of God, being illiterate.”

But their limited resources didn’t prevent them from taking steps of faith. The women decided to build a church, although their numbers were few. Claudia’s friend generously donated the land and construction began. The women’s husbands chipped in, and after erecting the building, they met almost every day.

After about a year—as the church grew to more than 100 people—the husband of one of the women became a Christian. He could read and write, and soon began reaching out to other Gypsy villages in the area. Because of the generosity of a financial donor, Claudia gave him a DVD player and several Magdalena discs. Six months later, they planted a second church. Claudia visited this new facility, and watched church leaders baptize over 100 new believers.

“They just [caught] the vision and multiplied,” she said.

When they started talking about building a third church in another village, they asked Claudia to come and show Magdalena again. Excited to see them become self-sustaining, she encouraged them to show the film on their own. Because of her heart connection, Claudia partnered with this young community of faith, showed them how to walk with Jesus and become vibrant, multiplying believers. Today these women continue to use the life-changing story of Jesus to transform their community.

Small groups and church plants like these stand as a testimony of God’s power to change lives. Your contribution is sparking spiritual movements everywhere.