A Secret Connection to Jesus

Walking around an airport, a man* secretly carried a wireless hotspot in his pocket. This device advertises open Wi-Fi to anyone seeking an Internet connection. Similar to the Wi-Fi at a McDonald’s or in a hotel, the first page served from the hotspot displays content available in the local languages, including the text of the Bible and the film, JESUS.

In just over an hour, 30 business travelers, asylum seekers and tourists downloaded JESUS from the hotspot in this man’s pocket—in a country where authorities would kill the man if he handed out a single copy of the Bible on a street corner.

Today, this man has prepared 2,500 hotspot units to be carried by hundreds of volunteers in the coming months. Who knows the potential impact of the story of Jesus on phones and touchscreens in places where traditional methods of ministry face so much resistance?

* This man and his location need to remain nameless for security reasons.


Adela walked down the street, inviting villagers to a tent gathering. Soon, he began sharing the gospel with a woman standing in her yard. Overhearing their conversation, a drunken man stumbled to them. Tossing his cigarette aside, he admitted: “I am a very sinful man. I have many flaws. I’m a bad man. What must I do?” Adela told the man to repent. He responded: “But I’m drunk all the time. Will God receive me?” Adela explained that God would hear him if he was honest with God and prayed for forgiveness for his sins. The man agreed to pray. Laying his hand on the man, Adela prayed that the man would to open his heart to Jesus. 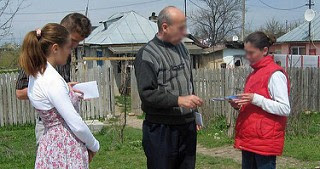 Upon finishing the prayer, the man wondered, “What did you do to me?” He continued: “When you put your hand on my shoulder I felt something change inside me.” The man no longer felt the effects of his alcohol consumption. Adela gave the man a copy of the New Testament and arranged to visit his home the next day to explain more about Jesus. During the follow-up visit, 11 of the man’s relatives also indicated decisions for Christ.
Posted by Tez Brooks at 9:30 AM No comments: