Jesus Appeared to Light the Way

During the dangerous journey across the Aegean Sea to Greece, a group of refugees in one boat were so frightened, they called out to God. When a "shiny heavenly figure" appeared, the entire boat knew it was Jesus. From that point the sea became calm and peaceful, and they finally landed safely on shore.

Convinced that the heavenly figure was truly God, they all wanted to become followers of Jesus. 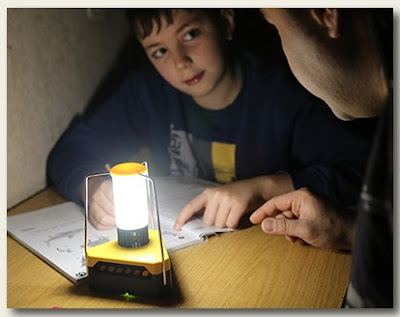 Many weeks later, the refugees were together in a disciple group, sharing what happened with their Bible teacher - himself a former jihadist and now a vibrant Christian. He is the one who passed their testimony onto us.

God has a heart for all people. He desires that they come to faith in the Light of the World, Jesus.
By the thousands, Iraqi and Syrian refugee families who have survived their trek over land and sea must now spend their nights in abandoned buildings, store fronts, garages, open spaces or tents. In camps without electricity, they often sit in darkness. Jesus Film Project®

is helping to remedy the situation by providing refugee families with "Light Their World" lamps. Each lamp is solar powered and has a built-in audio player and speaker that plays "JESUS" in their own language. The lamps also have an FM radio set to Christian programming, a mobile phone charger and of course, an LED light. These lamps are providing hope to refugee families by stirring their hearts toward God.