Sid and Liz Doyle are ministry partners who live south of Dearborn, Michigan - home to one of the largest Middle Eastern immigrant populations in America. The Doyles and their volunteers have given out thousands of DVDs of "JESUS" in their area. 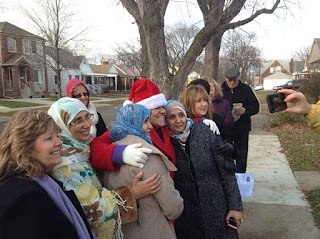 Liz was leading a group of church volunteers Christmas caroling from home-to-home in a Middle Eastern immigrant neighborhood. It was a classic scene on a cold Michigan night. Everyone was bundled up. They walked up the steps of one home and stood on the porch. They began singing...

The head of the house came out. He graciously welcomed the visitors. Soon other family members joined him on the porch and stood in the doorway. Eventually 12 people were listening to 12 carolers. Liz then asked the man if the carolers could pray for him and his family. He agreed. The prayer was very bold..."Jesus, You were born of the Virgin Mary! You led a sinless life. You died for our sins and rose from the dead...bless this family...You offer these people eternal life...In Jesus' name we pray...Amen!"

Suddenly the man raised both his hands and began crying out, "Isa...Isa...Isa (Jesus)!" Liz asked the man if he was okay and asked why he was shouting, "Isa."  He said, "Isa came to our house. My son was very sick in bed. Isa came into his room and touched him. My son jumped out of bed completely healed and ran to us saying that a man in white came and healed him! It was Isa!" Liz asked the man if he would like to know more about Isa. He exclaimed, "Yes, I would!" The carolers gave the family a gift of the "JESUS" DVD in Arabic, which they excitedly received, eager to learn all they could.

Liz later told a local pastor about the family's positive response and asked him to begin the follow-up process with this family.
Posted by Tez Brooks at 8:00 AM