The Call of God


A while back I had the honor of speaking for 3 days at a youth camp in Polk City, Florida to more than 70 high school students. 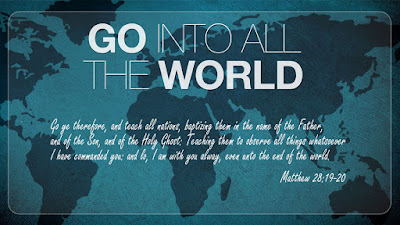 As the featured missionary for the week, I highlighted our ministry with The JESUS Film Project. The first day I shared the ADVENTURE OF MISSIONS covering the history and the work of the film. The next day I spoke on the SACRIFICE OF MISSIONS telling stories of persecution and martyrdom of some of our overseas JESUS film workers. The last day I covered the FUTURE OF MISSIONS presenting the need for workers at our JESUS film Master Studios in Orlando. I followed that up with several scriptures including Matthew 28:18 and a call to action.

I was amazed as 29 young people stood up to announce they felt God was calling them into missionary work. All of them came forward for prayer. Praise God for what He is stirring in the hearts of these youth as He prepares them to take our place one day.
Posted by Tez Brooks at 11:30 AM